The inspiration behind my armor rings 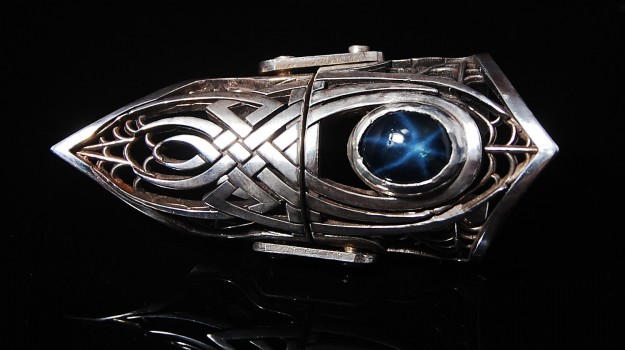 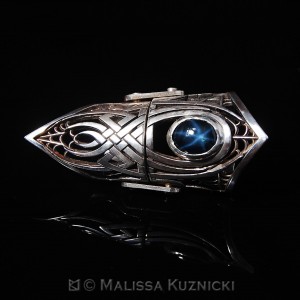 I’ve launched my kickstarter project in order to fund prototyping and production of my next hinged full finger ring.  I’ve added some really cool rewards and am trying to get the word out.

Where did the inspiration come from?

Honestly, I design all of my jewelry for myself.  They are all things that I want to have and wear.  In fact, I am almost always wearing jewelry that I designed.

I have been interested (nearly obsessed) with the idea of hinged full finger rings since I was a teenager.  I would see them occasionally at Spencer’s and similar stores.  They were usually big and gaudy with some sort of dragon on top, were made out of some painted base metal that would turn your finger green almost instantly, and the hinges didn’t offer all that much mobility.  I saw one in sterling silver once in an “goth” store in Lakewood, Ohio in 2001.  Unfortunately, it was not adjustable and at that time I had no idea how I would get it sized.  I thought about making my own but at that time I had no idea how to go about it.

Fast forward to 2009.  I had been working in the jewelry industry for about 4 years when my boss came back from Tucson talking about CAD designed and 3-d printed jewelry.  A giant light bulb came on in my brain!  Before working in the jewelry industry I worked as a CAD designer for both the automotive and aerospace industries.  I had loved the 3-d modeling but didn’t like the lack of creativity.  Using CAD to design jewelry? PERFECT!  I immediately began working on my first designs.  Naturally, one of the first designs I created was an armor ring.

I frequently wear the first ring I designed.  I can wear it all day comfortably and it doesn’t interfere with daily activities.

When it come to the design on the ring, it is obvious that I am heavily influenced by Celtic knot work designs.  One look at the other jewelry I’ve designed will tell you that it’s a common theme in my work.  I am drawn to the complexity of these designs.  To me they represent the complexity and cyclical nature of life.  They are also related to vines.  Vine and tendril shapes are also prevalent in my glass work.  They represent duality.  When I see vines, they can represent growth but they can also indicate restriction or feeling smothered; it all depends on your perspective.  It is a reminder that through changing your perspective you can change your reality.  I also frequently incorporate other symbols such as hearts, spiders, and ankhs.

Hearts naturally allude to love.  When I refer to love I am not only referring to relationships but also love in a greater sense.  I’m am referring to unconditional love; living your life with love.  A selfless love that accepts all things and lacks judgement.  This is one of the keys to spiritual growth and living a balanced life.

Ankhs, as many of us know, are an Egyptian hieroglyphic that is said to represent eternal life.  I use it to represent the endless cycle of life, death, and re-birth.  It represents our eternal path toward enlightenment.

The spider may seem a bit more obscure.  I once read somewhere that a descending spider is a symbol of prosperity.  It represents gifts from God.  Also, I see spiders as architects.  They weave intricate webs their lives depend on it.  They make it and they can change it at will to suite their needs. It reminds me that we weave the web of our own lives.  We are in control of our lives, how we interact within our lives, and we can change our lives to suite our needs.  It reminds me that not only do I have control over my life but I am the only one responsible for it.  Success or failure, happiness or misery, they are all the result of the web I have woven for myself.

The trinity knot or triquetra is generally used to represent trinity.  It has been used to represent The Holy Trinity, as well as the three stages of the goddess in pagan/ neopagan traditions.  It has been used in just about any situation where three elements come together to create one.  In my work there are two aspect that it represents.  One is a representation of balance between the Mind, Body, and Spirit and how all three have to work together.  The other represents the relationship of opposing forces or dualities combining in balance to create one.  One extreme can not exist without it’s opposite and neither is good on it’s own but the balanced combination of the two creates unity.

UPDATE:  While the kickstarter project did not succeed, I did succeed in getting the prototype made and the ring is now in production. 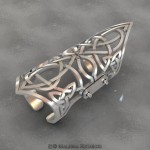 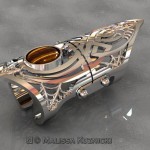 2 Comments for The inspiration behind my armor rings

Yes. My jewelry can be purchased through my etsy shop. There is a link at the top of the page.