The other day while giving a co-worker some tips on sawing, I was reminded of a story my instructor told us back when I was in jewelry school.

He relayed the following story about a store owner he used to know. Typically when a jeweler is interviewing for a job, they have to complete a bench test. This is where the employer gives them several tasks of varying difficulty and the jeweler has to complete them. This gives the employer an idea of the jeweler’s skill set. However this particular store owner, when hiring new employees, did not give a bench test. He simply handed them a penny and asked them to saw out Lincoln’s head. You might wonder what this would prove about a jeweler’s skill set. Sawing is only one of many skills that are required to be a jeweler. My instructor went on to explain the store owner’s theory. It was not really about how well the person did on the sawing job. It was about gauging person’s reaction to their own work. If a person did a poor job sawing out the penny but thought they did OK, then the store owner knew that they did not have the attention to detail necessary to be successful as a jeweler. His thinking was that hand skills can be taught and mastered with enough practice but you can not teach them the attention to detail that is required to really become a good jeweler.

I don’t know if the store owner was right but I think there may be some truth to his theory. I believe that the fact that I have some obsessive tendencies are part of what makes me continuously strive to be better at what I do. So, when I was reminded of this story I mentioned it to my co-worker. I admitted that I’ve never tried the “penny test” and wondered how well I would do. So, I had some time today and decided to put my curiosity at rest.

The following pictures are what I accomplished in about 45 minutes (I never claimed to be a fast jeweler.) Sadly I was hoping to not break any blades but when I was in the home stretch of the last cutout, I broke one. I also set myself the goal to do each cutout in one continuous line instead of multiple chunks. I don’t know how these results would compare with anyone else but I think I did fairly well. I can also see some things that I would do differently next time. So, I suppose considering that, I would pass the test. 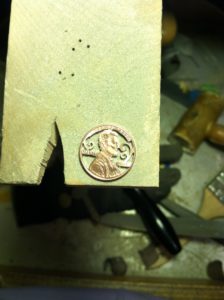 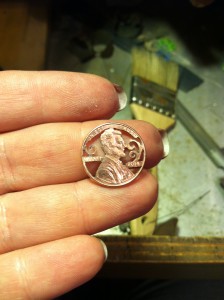 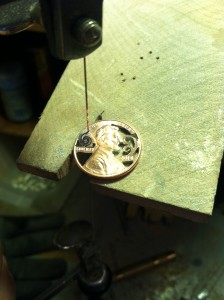