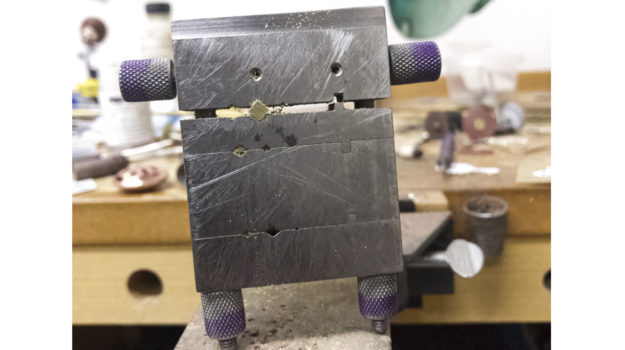 Though I spent over a decade working in the jewelry industry before attacking the rigors of graduate school, my time spent studying with Tom Muir at Bowling Green State University made me an exponentially better metalsmith.  There I was introduced to what Tom called “the million-dollar tool.”  He explained it was not called this because it cost a million dollars but because it was worth that much. Maybe more.  Much more.

At first, I was unaware that it wasn’t actually called a million-dollar tool. But with a bit of searching, and a lot of coffee, I found it.  I learned this had a real, albeit much less sexy name.  This little wonder is called a miter-cutting vice.  It looks like a steel baby robot with a single tooth and knobs for arms and legs.  It is used to hold metal at specific angles for cutting and filing.

In my tool shopping fervor, I noticed that the prices varied significantly.  Tom advised me to “get the expensive one” because it was higher quality and hardened.  Being a newly poor graduate student, I opted for the medium-priced option.  I chose it because, in addition to holding metal at 90° and 45°, it also can hold it at 60°.  I was able to directly compare this with the one we had at school. I can attest that the more expensive one did move more smoothly and didn’t seem to be as affected by file marks.  Much to my chagrin, Tom was right.  However, I have been happily using the one I purchased for over three years now.

So, why it is worth “a million dollars?” This is certainly not an essential tool.  However, it does make precision work infinitely easier.  I always reach for it when I need to make a batch of rivets of the same length.  It comes with a handy “L” shaped wire that allows me to repeatedly cut the same dimension.  I also use it to face off one end of a rivet at the same time.   It effectively eliminates the need for buying a tube cutter.  It is great at holding tiny pieces of sheet metal as well as filing them square.  With this tool, just slide your piece of metal into the 90° slot and push it up against the robot’s “tooth”.  This will hold it square while you true up the edge.

Graduate school was punishing but having this tool has made many things much more manageable.  Whether you are a student, a seasoned pro, or somewhere in between, I think Tom was right when he named it the Million Dollar Tool.  This little gem has really earned its distinctive nickname and definitely deserves a prime spot on your bench.